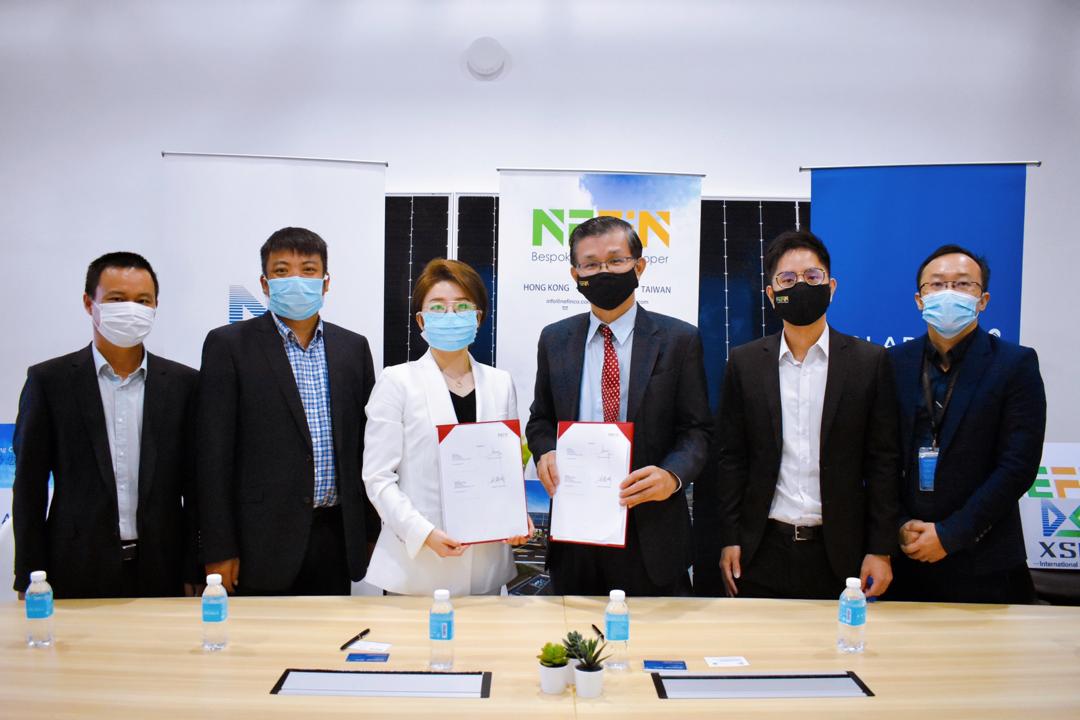 The PPA was signed at a signing ceremony held at NEFIN’s office at Penang where XSD was represented by its President, Ms. Joyce Shi ChenYe (施晨烨), NEFIN was represented by its Special Executive to the Chairman, Mr. Chong Kok Ming (张国明). Group Chief Executive Officer of Solarvest Holdings Berhad (“Solarvest”), Mr. Davis Chong Chun Shiong (张俊雄) is also present by invitation to witness the signing of the PPA.

In conjunction with the signing ceremony, XSD announced its sustainability plans. For a start, XSD will install a 9.2-megawatt (MWp) solar PV system on its planned facilities in Kulim Industrial Park located at Padang Meha, Kedah via the PPA.

The project will see NEFIN building a solar PV system that consists of approximately 21,000 solar PV panels that will collectively generate over 13.5 million kWh clean energy and off-setting approximately 9369 tons carbon emissions annually. For illustration, a 30-year old tree can absorb about 193 pounds of carbon dioxide per year. Hence, the clean energy that will be produced by XSD in the new factory in Malaysia is equivalent to growing 107,021 30-year old trees for the mother Earth. The construction of the project is expected to be completed by Q3 of 2021.

Ms. Joyce Shi, President of XSD said, “Sustainability has been a vital focus for our business as we move towards “Green Papermaking” and the recycling economy. We have built a value chain that employs a closed-loop system, emphasizing on reuse, remanufacture, and recycle, starting from our point of collection of raw materials to production and waste management. In line with our goal to be a socially responsible and environment-friendly enterprise, we use recyclable materials such as wasted paper and adopts wasted water processing system to produce our paper products.”

“The inking of this agreement further strengthens our cause, and we look forward to power up our operations with clean renewable energy generated from this project. This is just the beginning of our green initiatives in Malaysia and we have earmarked a RM35 million investment target for combination of green initiatives which include water and air system as well as this solar PV system project. We intend to build a green paper industry park here and we are currently in talks with several industry leaders to roll out the plans, such as NEFIN and Solarvest for the provision of Engineering, Procurement, Construction and Commissioning (“EPCC”) for our solar projects. We are proud to partner with both distinguish Solar Industry Leader in this solar project, and certainly this lay the foundation for more partnership in the future.”

XSD made its foray to Malaysia in 2018 with a RM1.2 billion investment plan to develop a green paper industry park in Kulim, Kedah as part of its relocation plans into the Southeast Asia market. The development will help spur the local economic growth in the area and create approximately 1,300 job opportunities to the locals in a single phase.

Mr. Glenn Lim, CEO of NEFIN, said, “It is our goal to achieve carbon neutrality for our clients as our contribution towards the fight against climate change. One of the most optimum way to reduce carbon footprint for commercial and industrial businesses is the planning stage for new factories or buildings are being designed and constructed, transforming the way we build. This is essential for long-term planning, and especially important for corporates that aim to contribute to sustainable development. With the in-depth industry knowledge and extensive experience of the NEFIN team, our contributions at the early design stage can effectively help maximize clean energy generation, cost saving and ensure seamless integration of the solar PV systems with the buildings. We are very proud to be working with XSD on this project and look forward to more opportunities to contribute to a greener future for all.”